Born in 1907 in New York State, Elizabeth Miller (her real name) comes from a privileged family. Barely 17 years old, the unquestionably beautiful young American began a career as a model. She quickly became an indisputable icon of the 1920s and 1930s. She agrees to pose for Edward Steichen, chief photographer of American Vogue. This life does not suit her for long as she cannot bear to be reduced only to her advantageous appearance. In return, she therefore asks Edward Steichen to teach her the basics of photography

Muse and assistant to Man Ray, she learns and hones her art

In 1929, Lee Miller moved to Paris and became the assistant – and muse – of a famous French photographer, Man Ray. She posed for him, but she learns above all with him various photographic processes which will be useful to him later in her career. With Man Ray, Lee Miller comes into contact with the world of Parisian artistic avant-gardes. She is more particularly close to the members of the surrealist movement, including great artists like Pablo Picasso, and leads a bohemian life.

Lee Miller left Man Ray in 1932 and returned to the United States to open his own studio. She married an Egyptian businessman and moved to Cairo, where her taste for photography only intensified. However, she quickly gets bored and takes the direction of Paris where she meets Roland Penrose, surrealist artist, who becomes her lover shortly before the start of the Second World War.

Lee Miller’s career took a turn in 1942. The Vogue agency in London offered her the opportunity to produce photo reports. The British government realizes the great potential of the women’s press as a means of training civilians, particularly women, to replace men who have gone to the front. She does various photoshoots on women dressed in factory outfits, for example. It also documents the daily life of civilians during the war : poverty, rationing, and above all the new role of women as workers and heads of families.

Lee Miller does not thrive in this job and only dreams of one thing : to get out on the pitch. She is a woman, and that seems inconceivable.

« I’d rather take a photograph than be one. » Lee Miller

Her meeting with David. E. Scherman change the course of his career. She became, with his support, an official war correspondent for Vogue magazine with the United States military. In 1944, she was sent to Europe to follow the US military in the period following the Normandy landings. She is one of the only female war correspondents in combat zones. She would also be one of the first female photographers to take pictures of conflicts and capture images of concentration camps after their liberation. With David E. Scherman, she went to Dachau and Buchenwald camps.

Wearing army treillis and helmet, Lee Miller finds herself far from his previous life as a model. War is a way for her to free herself from her old image as a woman-object. 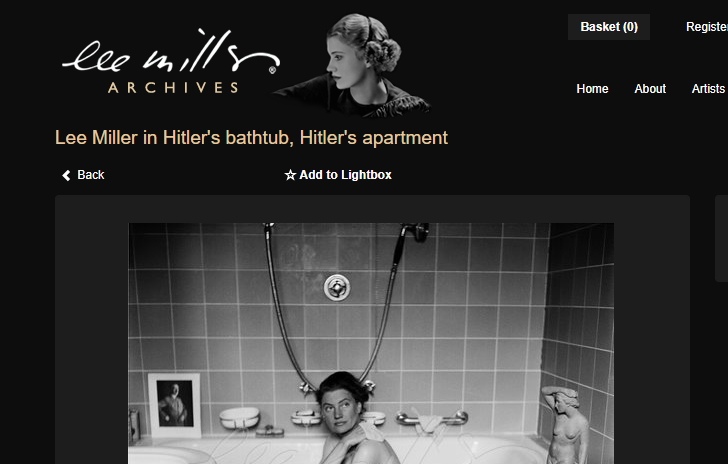 Photos are copyrighted, we cannot display them on the site but you can view them on the official Lee Miller Archives site.

Lee Miller becomes famous with a photo of her taken in Hitler’s bathtub. On April 30, 1945, David E. Scherman and Lee Miller went to the Dachau camp to document its release. That same evening, shortly after the news of Hitler’s suicide in his bunker, they went to Munich to the dictator’s apartment and stayed there for a few days. It is on this occasion that the photographer was immortalized by her sidekick in Hitler’s bathtub, or sitting at his desk, and even lying in the bed of Eva Braun, his partner.

« The place was in perfect shape. […] It was not empty enough to be ‘rented’ as it is, but a quarter of an hour of cleaning to dust off the cups would have been enough to make it available to a new tenant to whom the presence of sheets and dishes ‘AH’ would not interfere. » Lee Miller à Iconics Photos, 1945

The photograph of the bathtub is a symbolic image. Lee Miller literally washes away the horrors committed by Hitler the day after his death.

Lee Miller, a woman hurt and committed to women

Although raised in a wealthy family, Lee Miller did not have an easy childhood. She was raped at the age of 7, committed by a friend of her parents. Serious venereal disease ensues that will take years to heal. Her relationship with her photographer father deteriorates as he continues to photograph her naked even though she is already a teenager. These events mark her forever and play a predominant role in her relationship with men and in her work.

Lee Miller produced a series of photographs at the time of the liberation of Dachau and Buchenwald camps. She focuses on SS guards whom she catches head on and brutally. These photographs explore the notions of voyeurism and humiliation. This is a kind of personal revenge, which goes beyond the simple annihilation of Nazism. Without a doubt, these guardians take, in Lee Miller’s mind, the form of his past abusers.

Even though Lee Miller’s most famous photos are of men, it should be noted that the majority of his photographs show women. She will photograph American nurses, recruits of military service reserved for women, but also resistance fighters or women shorn during the Liberation. Lee Miller’s photographic legacy is very substantial. The impact of war on women has never been so well represented.

Like many inter-war women, companions and wives of renowned artists, Lee Miller was relegated to the background for a long time. Little consideration was given to his personal work at the time. Even today, the names of photographers like David E. Scherman and Robert Capa are recognized by more than that of Lee Miller.

If you want to know more about Lee Miller

To deepen the subject in a more specialized way

An Article on Lee Miller, a fighter on all fronts, by Anaïs Boutot https://journals.openedition.org/transatlantica/4299?lang=en