The Normandy Victory Museum has just received an exceptional piece due to its history, which will complement the objects presented at the museum with regard to internal resistance in the Channel. This is the jacket of a PTT agent, courier with the SNCF, in the 1940s. But more than just an outfit, it is the one that belonged to René Duclos, a Coutance resistance member of the Centurie Network -OCM.

René Duclos, a discreet courier from Coutances, is spotted by the Resistance

Born in 1899, veteran of the Great War, René Duclos lives in Coutances. In 1939, he was mobilized again and left for Cherbourg, where he was taken prisoner, a few months later, in June 1940, when the Germans arrived. With several comrades, he manages to leave company with the occupants and joins Coutances where he is finally demobilized. He then resumed his job at the French Post as a PTT courier on the railway lines. He was assigned to the “allège postale”, a wagon without compartments where bags of mail from post offices near the stations crossed were stored and sorted. Packages and letters are thus received at each station stop, the wagon playing the role of traveling post office, on the Lamballe-Coutances, Coutances-Lison-Caen or Coutances-Cherbourg routes. Alone in his post office on rails, René Duclos was quickly considered as an interesting potential agent by the people of the Resistance.

Where René Duclos becomes Hyppolite 323 and joins the Centurie

In December 1940 or early 1941, in Lison, he was approached and recruited by Gaston Picot, of Neuilly-la-Forêt, as a P2 agent, within the Centurie network, on behalf of the Civil and Military Organization. Now known under the pseudonym “Hyppolite 323”, its mission is to gather intelligence and circulate mail between members of the network as it travels. Its radius of action then focused on northern Brittany, La Manche and part of Calvados. From the end of 1942, with the establishment of the STO (Compulsory Work Service), René Duclos also circulated false papers, recovered in the area of Saint-Lô, thanks to the OCM members present at the Prefecture of La Manche, for the benefit of young refractories from the Coutances region. On several occasions, René Duclos also communicated information to two railway workers from Coutances, members of the “Front National Francs-Tireurs et Partisans” network, but without ever revealing his commitment to them. Arrested in July 1942 during the big roundup in the communities of the Communist resistance in Coutance, the two men disappeared, without however denouncing their PTT informant. Finally, on many occasions, René Duclos lodged at his home, without saying anything to his wife or daughter, SOE agents, on mission in France, who wore the clothes of railway workers or postmen but spoke very little. avoid revealing their English origin.

A delicate task: intercepting mail destined for the Feldkommandantur

But the most complex task René Duclos has to perform is intercepting mail from private individuals destined for the Feldkommandantur or local annexes. There are letters often filled with denunciations or information likely to help the Germans, in particular in their fight against resistance (possession of weapons, anti-German activity, listening to the English radio, Gaullist remarks, etc.). This work required time and prudence, some letters being simply destroyed, others going back to the OCM members of the Prefecture who falsified them and put them back in circuit, having however warned the people concerned beforehand! In this task, he is frequently assisted by another postman from Coutance, recently hired.

Winter 44 the moment to sum up

Having finally managed to slip through the cracks, René Duclos witnesses the bombardment and destruction of Coutances, then the liberation of the city. At the end of July 1944, he managed to re-establish contact with the OMC, which appointed him as a member of the Departmental Committee for the Liberation, as well as a tenured juror at the Court of Justice of La Manche. He sat in Coutances from the winter of 1944 and judged the facts of collaboration, denunciations, etc. Quickly, René Duclos obtained from the departmental service of the Veterans, the title of “Volunteer fighter of the Resistance”.

Thank you to the family and to the generous donors who will recognize themselves. This piece of history is now on display in the museum. So that we never forget the sacrifice of these men, for our Freedom. 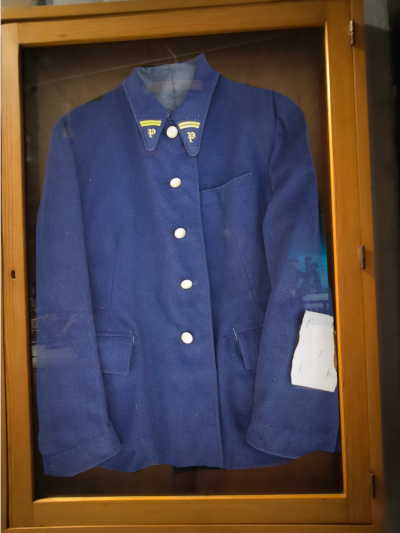 Discover this collector’s item at the NORMANDY VICTORY MUSEUM where you are presented with more than 10,000 authentic historical objects and around thirty scenographies created with the greatest respect for History and the men and women who made it.
Book your ticket

Food rationing in La Manche during the war

Due to its agricultural situation and a certain food self-sufficiency, La Manche even if it suffers, seems a little spared by the shortage at least as far as food is concerned.

The A10 Airfield at Carentan, an American airfield in 1944

Did you know ? The Normandy Victory Museum is located on a former historically known American military aerodrome: the A10 Airfield. It is still in operation and small aircraft can still use its shortened runway, 400 meters long.

In 1939, when men were mobilized, women were on all fronts. They are found in domestic tasks as usual but also in the production of weapons, mechanics, fields, in hospitals, in the resistance and in battles. This exhibition pays tribute to them and highlights their sometimes overlooked actions.

Read
Go to the blog